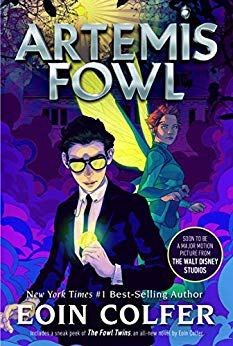 Twelve-year-old Artemis is a millionaire, a genius-and above all, a criminal mastermind. But Artemis doesn't know what he's taken on when he kidnaps a fairy, Captain Holly Short of the LEP recon Unit. These aren't the fairies of the bedtime stories-they're dangerous!

So I finished my re-read of Artemis Fowl the other day and it's been years so it was basically like reading it for the first time.  I had remembered small pieces of it but there were huge gaps of time that I didn't remember at all.

So Artemis is a boy who has basically kidnapped a fairy in order to get what he wants.  The Fowl's are basically pirates and do what they have to in order to what they want.  In Artemis's case he should be in school but with his father gone, his mother seems to have forgotten about him.  So he does what he has to in order to get her back.  He gets more that he bargains for when he kidnaps Captain Short.  But in the end everything works out for him.  Or does it?  Does everybody get what they want?  Does everybody survive?

This was a thrilling story and it was well written.  I hope to continue the series.  I also look forward to seeing the book turned into a movie soon.  Eoin Colfer wrote an intricate tale of mythical creatures and humans alike.  There are twists and turns all over the place and you honestly don't know how things are going to turn out for these characters at all.

Again I look forward to continuing the series.