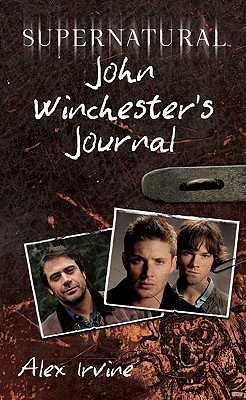 Sam and Dean Winchester know all the secrets their father recorded in his journal. Now you can, too.
On November 2, 1983, Sam and Dean Winchester lost their mother to a demonic supernatural force. In the wake of the tragedy, their father, John, set out to learn everything he could about the paranormal evil that lives in the dark corners and on the back roads of America . . . and how to kill it. In his personal journal, he not only compiled folklore, legend, and superstition about all manner of otherworldly enemies but he also recorded his experiences—hunting the creature that killed his wife even as he raised his two sons.
Part prequel, part resource guide, John Winchester's Journal finally gives fans the ultimate companion book for Supernatural. It's all here: the exorcism Sam and Dean used in "Phantom Traveler," John's notes on everything from shape-shifters to Samuel Colt, Dean's first hunt, Sam's peewee soccer team . . . and John's single-minded pursuit of a growing and deadly evil.

When I saw this on the shelf in my new public library I knew I had to read it.  I was not let down.

For those of you who don't know about Supernatural and the Winchester family then this would be a good place to start.  The book tells the story of how John, the father, became a hunter.  It talks about how he raised his sons, Sam and Dean, alone.

The author did a great job in telling the story of John Winchester.  I look forward to reading more about the Winchester clan as I find more books based on the Supernatural saga.  I also really miss John Winchester, I liked him more than Mary.  Just saying.