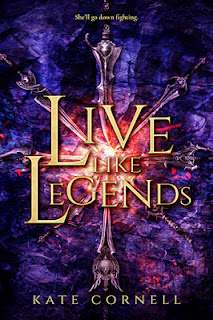 Summary:
Princess Kalista has known her role from birth. She’s spent her entire life
preparing to be the socialite wife of a prince from a peaceful kingdom. But on
her big day, she is shocked when she is instead forced to marry the warrior
prince of a cursed land, who is as cold as the wintry kingdom he’ll one day
rule.
Carson has a throne no princess wants to share with him. An immortal beast
ravages their land, and he’ll do anything to stop it, even marry a complete
stranger on the day she was supposed to wed her betrothed. Let her hate him for
it, but Kalista is his only hope for peace.
Kalista knows she’s just a pawn on the chessboard of politics, but now she’s
expected to kill an unstoppable creature because of some legend about her
bloodline that Carson believes as truth. He trains her how to fight, and when
lessons in swordplay lead to lessons in love, her destiny puts more than just her
life at risk.
How far is she willing to go to save the prince she never wanted…but can’t
imagine living without?
Addo to Goodreads
~~~***~~~***~~~
EXCERPT

“I worked at the laces cinched up the side of my gown. The knot ended in the pit of my arm, and I couldn’t reach it. I needed to call for a chambermaid to assist me.

The humming had stopped.

I spun, clutching my arms to my chest as though to cover myself.

Carson was on his feet and almost next to me.

My face went hot. I was surprised someone who couldn’t understand me could make me so self-conscious, surprised that I could feel his gaze running the length of me like it had in the barracks, on the dance floor, without looking

“I can’t reach the laces,” I muttered, still clutching myself as though protecting my modesty while fully clothed. As if I still had any modesty to protect.

But being this close to him set off a flurry of butterflies within me.

If only I knew what he was thinking, if his face wasn’t so impassive.

He hummed that song again and stalked closer.

Almost unconsciously, I backed away from his approach.

It was a pleasant tune, reminiscent of one I’d heard before. He reached for me, cupping my shoulders in his enormous hands and turning me. He spoke, but I didn’t need words to know what he wanted. I lifted my arm.

He attacked the laces.

At least it proved a formidable adversary for us both.

With each tug of the laces, the dress grew tighter and tighter. I winced on the next pull, gasped.

Carson spat out a word, another instance where his intention seemed clear.

I laughed, filing the word away for later use, in case I wanted to shock Emmett. The monk probably didn’t intend to teach me the curse words.

I said it back to him.

Carson stopped, looking at me, shocked. After a moment, he nodded and smiled. “Yes.”

Carson drew his knife. He held it up, his eyes shining with mock fury, grinning. “Is one way.”

Yep. That would do it.

With a flick of his wrist, he cut the leather cord below the knot. The dress was still cinched tight enough to stay on, but now it would need repair.

He grunted and nodded with satisfaction.

“Thank you,” I said. “I’m sorry.” For what? Inconveniencing him? But the words were the ones I was now most practiced with.

He grunted and nodded again.

He was very close.

It was different when there wasn’t an audience. Out of the corner of my eye, I saw him swallow.

His fingers touched my forehead, catching a loose lock of hair and brushing it back. My head followed the sweep of his hand until I finally met his eyes. I imagined that glow inside the helmet, piercing, intense. Was there no part of him that was vulnerable? Did he ever drop his guard? Even the dance was a sort of war, a competition not unlike shooting targets for Reeven peerage.

Maybe it was easier not knowing what he thought, not knowing what he wanted, just believing that he and I performed our duties, our royal and religious obligation, creating a monster-slaying child of destiny. We were two players acting out prophecy. Our thoughts and wants didn’t matter.

He lifted my wrist. “One, two.” With each number, he slid one of his fingers between two of mine. “Three, four.”

“Five,” I whispered and he closed his grip with his thumb.”

~~~***~~~***~~~
REVIEW!!!
I absolutely loved this book.  It reminded me a little of The Wrath and The Dawn series by Renee Ahdieh plot wise and I loved that series as well.  So if you liked that series you will love this book as well.
Kalista was promised to somebody and had been studying his country and their practices but instead she is married to somebody she's never met.  As she is learning about her new kingdom and their language she is slowly falling in love with her new husband.  She is part of a prophecy and she knows that any kids she may have will be part of it as well.  When she mentions this to her husband he runs off to kill the monster of the prophecy.  Will he return?  Will they be able to make their marriage work?  Will they be happy?
I may have added yet another great author to my list of go to authors.  I am so glad I requested to review this book.  I have no words as to how much I enjoyed it.  It was a great story and I enjoyed reading it.  I absolutely look forward to reading more books by Kate sometime soon but I have a lot of books on my TBR list right now so it will have to wait.
5 monsterous stars!!
~~~***~~~***~~~

Kate Cornell is the author of Live Like Legends published on June 1st, 2020.

She is currently writing a novel. This statement is always true. At any given time, she is writing a novel. She has contributed to After Dark with Julian Clark, TMI Hollywood and Top Story! Weekly at iO West.

a Rafflecopter giveaway
Blog Tour Organized By:
YA Bound Book Tours
Posted by Ashley at 2:00 AM