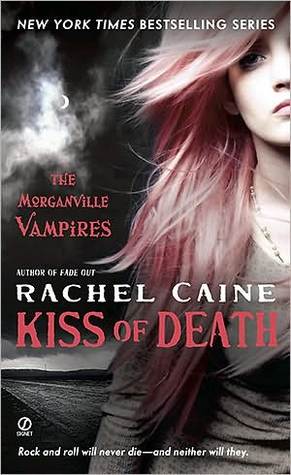 Vampire musician Michael Glass has attracted the attention of a big- time producer who wants to cut a demo and play some gigs-which means Michael will have to enter the human world. For this, he's been assigned escorts that include both a dangerous immortal as well as Michael's all-too-human friends. And with that mix of personalities, this is going to be a road trip from hell...
~~~~****~~~~****~~~~
REVIEW!!!
So this is the final book in my re-read of this series!  I love the Morganville Vampire series but 8 books in is as far as I've ever gotten.  I just put books 9 and 10 on hold through the library and can't wait to read them!
So in this book...Michael is approached by a music producer outside of Morganville.  So the whole crew heads out of town for Michael to record music and play gigs.  However, these guys can't go anywhere without trouble ensuing.  They stop at a hotel for the night and lose their car but Eve is truly excited about her new car.  Then they end up in a town overrun by Vampires.  Can they make it home in one piece?  Does Michael make it to his gigs and recording session?  You have to read to find out I guess.
Again the narrator did an amazing job.  Rachel definitely kept me on my toes with this one.  As I said above this book is the furthest I've made it in this series so I look forward to continuing.  I did request the next two books from the library.  I read 7 and 8 in one day so I figured I better grab at least two at a time.  I get sucked in and since the next book basically picks up where the one before it leaves off I have to know what happens next.
If you have not read these books I highly recommend it.  Start with book one or you'll get lost but this is by far my favorite YA Vampire series.
5 musical stars!!!
Posted by Ashley at 1:00 AM